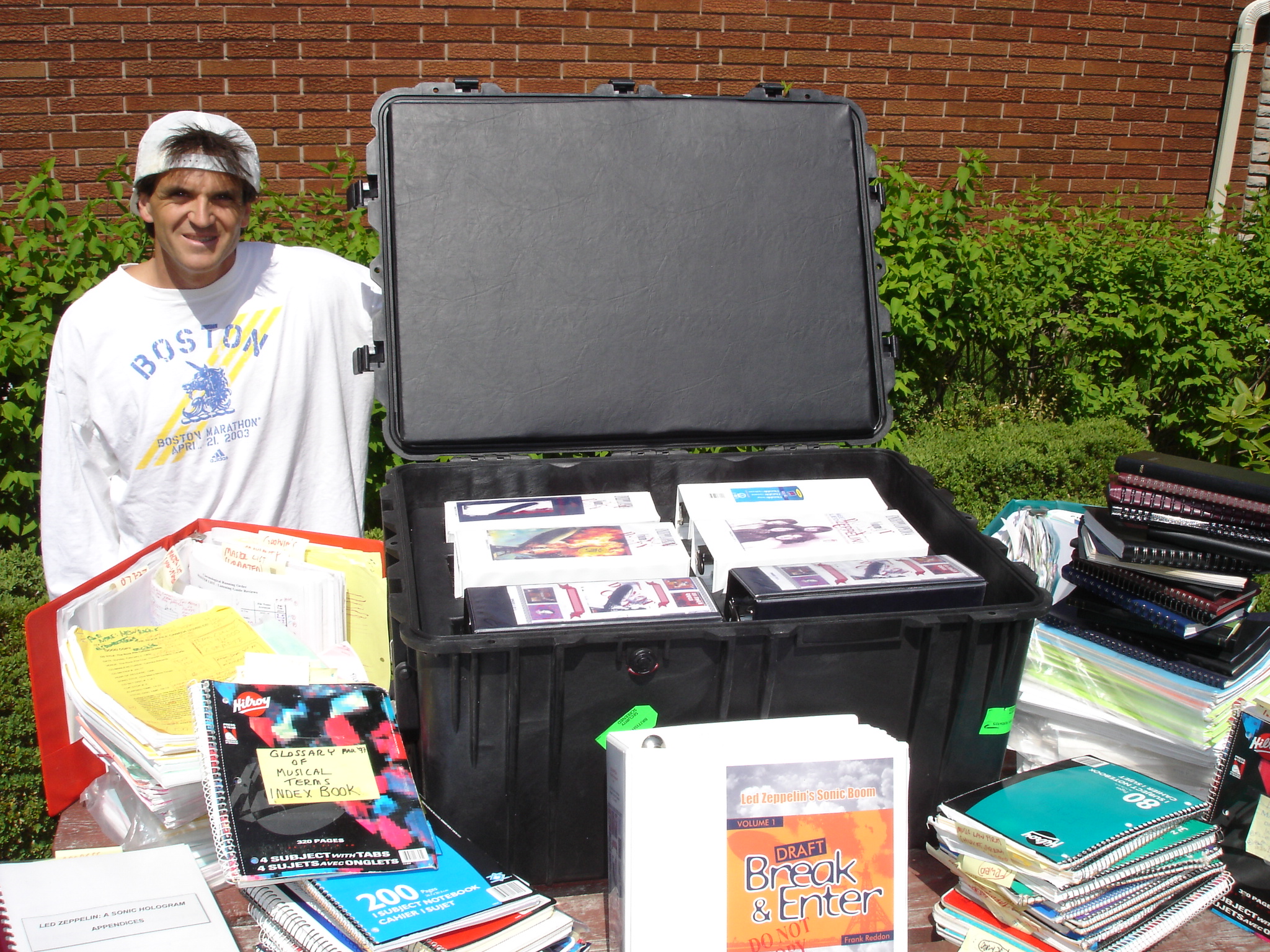 My younger brother, Frank, spent more than 22,000 hours of his life listening to Led Zeppelin’s live concert recordings. The band was famous for improvisation, never playing the same song the same way in their live performances.

Frank compared and analyzed, cue stop by cue stop, the differences from one concert to the next. This resulted in a rough manuscript that weighed 80 pounds.

In 2005, he and I hauled it in a custom-made case to London, England where we met with Led Zeppelin’s

archivist. He sat in our hotel lobby for five hours straight, mesmerized, and never budged.

Finally, he looked up – rather dazed and confused – and told us it simply had to be published. But he had no idea how, because it was so massive and intricate.

If he, as a published author himself, didn’t know how to tackle it, what chance did Frank and I have?

With the 40th anniversary of Led Zeppelin’s first-ever public performance coming up in 2008, we decided to extract a small, manageable chunk of Frank’s research that really had nothing to do with his in-depth music analysis. That would have to wait for another book.

There’s a lesson in that. You don’t need to write your magnum opus, the definitive work of your lifetime, in one fell swoop. Knowing that should take some pressure off.

We took the primary source interviews that Frank had conducted with various people over the years and compiled them into a book manuscript.

Now what? Do we seek a publisher or self-publish?

A publishing house in Chicago had expressed some interest, so off we flew in December 2007. What a disaster! They couldn’t possibly get it done in time for us to hit that 40th-anniversary date. If they pushed themselves hard and IF an author with a potentially more profitable book didn’t bump ours, it would take them at least two years. That would be too late.

They made our decision easy. We’d do it ourselves. Even if you’re lucky enough to land a publishing deal, you’re still on your own to market and promote the book unless you’re already a John Grisham or a Stephen King.

If you have to do all the heavy lifting yourself anyway, why not set your own production schedule, maintain creative control and keep the proceeds yourself, rather than give up royalties to a publisher who might just destroy the intended expression of your work?

I had the print production experience; I just needed my brother to quit interviewing people already!

Finally, Frank stopped writing in May 2008. The 40th-anniversary date we had to hit for our official publication date (aka the “OPD”) was September 7, 2008.

We had already taken care of the intellectual property issues such as licensing agreements, images, etc. and had chosen a pre-press firm to convert our Word files to PDFs for the book printer. But still I only had two months to edit his material and get finished files to the printer on time.

Rave Reviews
“The curators here at the Rock and Roll Hall of Fame LOVED Sonic Boom! May we please keep it in our Curatorial Library?”
M. Rutledge,
Curator, Rock and Roll Hall of Fame,
Cleveland, OH
“Thank you, Frank and Lou Anne Reddon, for bringing the wisdom of JJ Jackson to the world today.”
– Martha Quinn,
original MTV-VJ from the foreword of J.J. Jackson Remembers Led Zeppelin: The Music and the Guys Who Made It, Frank Reddon, Author, Lou Anne Reddon, Editor/Publisher
“Long before the lasers, the light shows and dragon suits, back in 1969, there were four newly bonded musicians delivering a unique brand of psychedelic blues-based rock. Frank Reddon has diligently searched out the people who witnessed their phenomenal impact. Read on to discover the true beginnings of the Led Zeppelin legacy…”
Dave Lewis,
United Kingdom. Editor of Tight but Loose magazine and published Led Zeppelin author, in the foreword to the e–book version of Sonic Boom: The Impact of Led Zeppelin, Frank Reddon, Author, Lou Anne Reddon, Editor/Publisher
We did it!

The finished book ended up being 736 pages, hardcover, perfect-bound and fully indexed with a gold-foil stamp emblazoned on the front identifying it as a commemorative 40th-anniversary edition.

Sonic Boom: The Impact of Led Zeppelin. Volume 1 – Break & Enter is now in the Curatorial Library of the Rock and Roll Hall of Fame in Cleveland, Ohio. All three surviving members of Led Zeppelin have a copy. Founding member and guitarist Jimmy Page liked it enough to ask us if we would donate a few books for him to autograph and include in one of his charity auctions.

It’s now out of print but I’d be happy to send you the e-book version with our compliments. Just send me an email with “Free e-book” in the subject line and let me know what format you’d prefer. It’s available in these formats: PDF (for desktop), epub (for e-readers/Kindle) and mobi (for mobile devices, phones).

That’s our true story. Tell me yours!